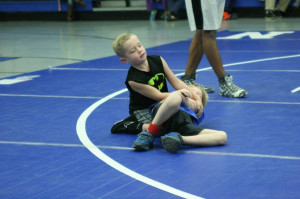 On Saturday, November 4, 2017 the 40th annual Sharp Creek & Metro North Elementary Wrestling Tournament was held at Northfield High School. The tournament wrapped up a week of elementary wrestling camp held at Northfield.  Wrestlers competed in one of three divisions: first and second grade, third and fourth grade or fifth and sixth grade.  A total of 46 wrestlers attended the camp and tournament.

Winning first place in the fifth and sixth grade division were Kameron Pratt, Donovan Parker, Jared Holmes and Turner Stephens. Others participating in this division were Trevor Owens, Matthew Wallen and Conner Dillingham.

Congratulations to all the participants.  It was a great day of wrestling.  Wrestling fans may go to the Northfield Wrestling facebook page for pictures of the tournament.