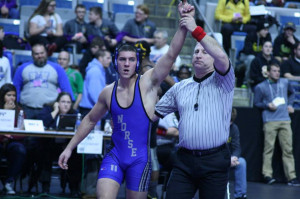 Layne Evans ended his high school wrestling career at the New Haven Semi-State in the Fort Wayne War Memorial Coliseum.
In the first round Layne pinned his opponent from North Wood in the first period in 1:57. Layne then fell to eventual runner up at 152 lbs, Columbia City’s Hunter Reed.Layne finished his senior year with a 34-4 record for the Norse. Nice job this year and congratulations on your success.
Norsemen Official Sponsor
Apr
11