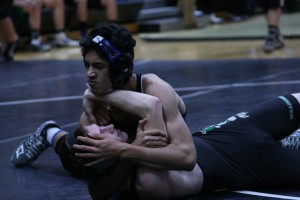 The Northfield wrestling team competed in the Rochester Super 8 wrestling tournament and placed 5th.  The Norse lost to Tipp Valley 36-42 in the first round.  Winning by pin were Layne Evans, Macauly Miller and Micheal Ford.  Sam Green, Zac Pennington, and Madison Nevil won by forfeit.

In the third round the Norse lost to Rochester 18-60.  Winning by forfeit was Jasper Donaldson.  Hunter Cox and Layne Evans both pinned their opponents.

Northfield wrestled Clinton Central in the fourth round winning a very close match 36-33.  Pinning for the Norse were Layne Evans and Micheal Ford.  Getting forfeits were Sam Green, Zac Pennington, Macauley Miller, AJ Hunt, and Jasper Donaldson.  Jeremy Okuly pinned his opponent in the only jv match we had.

Layne Evans continued his winning ways by going 5-0 on the day and stretching his record to 25-1.  He was also crowned the winner of his weight class